“But now the righteousness of God has been manifested apart from the law, although the Law and the Prophets bear witness to it— the righteousness of God through faith in Jesus Christ for all who believe. For there is no distinction: for all have sinned and fall short of the glory of God, and are justified by his grace as a gift, through the redemption that is in Christ Jesus, whom God  put forward as a propitiation by his blood, to be received by faith.” – Romans 3:21-25 (ESV)

“He was delivered over to death for our sins and was raised to life for our justification.” – NIV Romans 4:25

Justification by faith, through grace is a free gift from God.  Salvation is free to all that believe, and bow the knee to the Lordship of Christ. While grace is free, it cost Jesus his life. He paid our sin debt. And thank God he was raised from the dead for our justification!  We can be justified by God no matter what our skin color or social status in society is. This fact brings hope that a works based justification just cannot give us. A works based religion produces either hopelessness or religious pride.

This free gift of justification gives the downcast hope and can actually produce social change in a community and society as a whole. I cannot conceive of going back to a works based relationship with God. Even though I would not have admitted that I was trying to earn God’s acceptance, it was once a reality in my life. All other world religions and some forms of Christianity base their right standing with God on religious ritual and performance, not grace.

Believing in free grace will not make you complacent but it produces thankfulness and freedom and empowers us to do good works. Living a life of trying to appease God is oppressive and devalues what Jesus did on the cross. The reason that I can call Jesus my supreme treasure is that he first treasured me. He stood in my place condemned and in God’s sight – I’m a justified sinner as though I had never sinned. And having been justified in the sight of God – I’m now his son.

“God has sovereignly pulled back the curtain on His glory. He has disclosed Himself on the platform of both creation and redemption that we might stand awestruck in His presence, beholding the sweet symmetry of His attributes, pondering the unfathomable depths of His greatness, baffled by the wisdom of His deeds and the limitless extent of His goodness. This is His beauty.” – Sam Storms 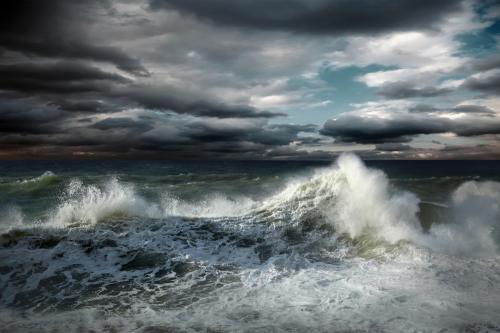 ​Some went down to the sea in ships, doing business on the great waters; they saw the deeds of the Lord, his wondrous works in the deep. For he commanded and raised the stormy wind, which lifted up the waves of the sea. They mounted up to heaven; they went down to the depths; their courage melted away in their evil plight; they reeled and staggered like drunken men and were at their wits’ end. Then they cried to the Lord in their trouble, and he delivered them from their distress. He made the storm be still, and the waves of the sea were hushed. Then they were glad that the waters were quiet, and he brought them to their desired haven.” – (Pslam 107: 23-30 ESV)

Their seems to be a lot of controversy among Christians over who has ultimate authority over “natural disasters” Jesus or the Devil. The simple answer is, Jesus. When Jesus rebuked the wind that was about to sink the boat that he and his disciples were in, he was demonstrating the fact that he was God. Jesus demonstrated his authority over nature in Matthew 8:23-26:

“And when he got into the boat, his disciples followed him. And behold, there arose a great storm on the sea, so that the boat was being swamped by the waves; but he was asleep.  And they went and woke him, saying, “Save us, Lord; we are perishing.” And he said to them, “Why are you afraid, O you of little faith?” Then he rose and rebuked the winds and the sea, and there was a great calm. And the men marveled, saying, “What sort of man is this, that even winds and sea obey him?”

As I was meditating on the passage above, I realized that Jesus rebuked the storm, with no mention of demonic activity. He simply told it to hush! I don’t know if the storm was demonic in nature or not, the text doesn’t say. But until I read Psalm 107, I had always assumed the storm was the result of demonic opposition. But as we see from the scripture, God can send the storm! In Job chapter 1 God allowed Satan to direct the wind in a destructive way.

” While he was still speaking, yet another messenger came and said, “Your sons and daughters were feasting and drinking wine at the oldest brother’s house,  when suddenly a mighty wind swept in from the desert and struck the four corners of the house. It collapsed on them and they are dead, and I am the only one who has escaped to tell you!” – (Job 1:18-19 ESV)

Satan may use the wind, but God created it, and has ultimate control over it. Gods’ providence is not only seen in nature, but it can been seen in all the affairs of men. I refuse to give into the view that, God knows the future but does not control it. Or even worse, some in our spiritually dark culture are saying that God does not even know the future. I am confident that the God who knows the number of hairs on our heads (Matt. 10:30) and notices when a sparrow falls (Lk.12:7) to the ground is fully in control of this world.

“About this we have much to say, and it is hard to explain, since you have become dull of hearing.” – Hebrews 5:11 (ESV)

“Therefore we must pay much closer attention to what we have heard, lest we drift away from it.” – Hebrews 2:1 (ESV)

“And through your faith, God is protecting you by his power until you receive this salvation, which is ready to be revealed on the last day for all to see.” (1 Peter 1:5 NLT)

When I become dull of hearing, I know that I’m in a spiritually dry place, and that makes me vulnerable to the devil’s attacks. Drifting away is something we generally do over a long  period of time. It’s starts when we begin to miss our times of prayer and Bible study, and neglect our spiritual condition.  I’ve drifted away and fallen into disobedience during different seasons of my life.  But God has been incredibly merciful to me, he’s always disciplined me as a son, and brought me back into a place of communion with him.

I do not believe that we can reach a point after regeneration that we lose our salvation. You don’t lose your salvation like you lose a coin. Some of my favorite Bible scholars believe that it is possible for real believers to commit apostasy,  which is a willful turning away from the faith, and rejecting the Lordship of Christ. The book of Hebrews contains serious warning’s against those that have been “enlightened” and then “fall away”(Read Hebrews 6.) And according to their view, that act of apostasy would result in being eternally lost. This view deserves our consideration. But that is not my focus here.

That lack of confidence in our Father’s keeping power, devalues and undermines the work of the cross.

I believe many have tasted the things of God and experienced them to some extent, but never actually receive the Spirit of Christ as Lord into their hearts. It is wise to “make our calling and election sure” (2 Peter 1:10.) We must all ask this question: Do we treasure Christ above all else? Maybe we have in the past, but now find ourselves becoming dull in our experience with God. If this is where you are presently at, heed the exhortation of the writer of Hebrews and do not harden your hearts.

As it is said,

“Today, if you hear his voice,

“There is a desire in almost all of us to be closer to God. However the heat and light intensify as we take those steps toward Him. Objectively we want that. Subjectively we discover it is a painful process. Often our secret hopes and fears become exposed and raw. We find that letting them go helps to relieve the pain and humiliation in our hearts, but then we often flounder with our identity because it was tied so closely to those private flavors and ambitions of our old existence. Then we come to a point of no return. The choice before us is to continue in faith toward that everlasting flame or turn back to some semblance of our old ways (Hint; this is why most revivals spark, burn, dim and die). Faith is a living. burning thing. It requires personal risk to see a reward . . . and that risk begins within. C.S. said it well, “No man knows . . . till he has tried . . .” – D. G. Spillman